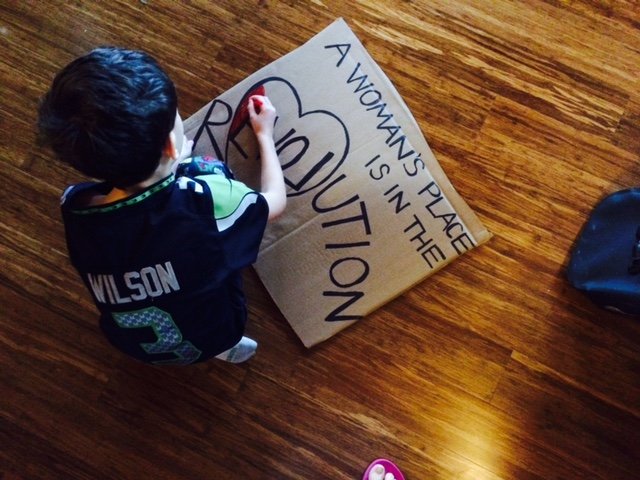 When I was in grad school, we watched a documentary on the overlooked contribution of women to the economy. It was a film from the 70s or 80s, but it was the first time I’d ever connected those dots. I had never considered all the unseen labor as being a part of our economy, because it wasn’t attached to money.

It was a revolutionary moment, as I looked around at the world with brand new thinking. I was intrigued with the idea of a changing economic system, one that models nature and rewards the relationship rather than the product, the journey rather than the destination. These feminist models of economy are seen in companies committed to the triple bottom line, supporting people and planet as well as profit. It’s an economy that recognizes that women’s rights are human rights are environmental rights. It’s all connected.

Then, several years after graduating, I made the decision to stay home full time after having my first child and I was thrust into the reality of being unseen. For the first time my husband and I merged bank accounts, and without the validation of being paid I became a ghost. I was working harder than I’d ever worked in my life and people would ask me how my retirement was going or when I planned to go back to work. It gave me insight into how terrifying it must be, at the end of your career, to drop into this abyss of ‘purposelessness’ without a job.

But this view of purpose comes from the economic standpoint that our money, and the ways we make money, is the ultimate definition of who we are. It relegates us to being earners and takers, when in fact we are all earning something and taking something regardless of what we ‘do’. Caring for people, whether child care, elder care or emotional and self care (all traditional female roles), is undervalued because we do not consider relationship to be at the heart of economy. Yet our time spent with others is the ultimate currency, and the basis for a whole systems economy.

So on this International Women’s Day, I celebrate all the ghosts in the system. I stand in economic solidarity by wearing red, not spending money, and cheering the teachers at our school who will make a statement by walking out at the end of the school day. I also encourage each of us to grapple with the concept of inequity and make a strong, individual commitment to support a vulnerable community in the current political climate. And while considering this, remember that large national organizations are receiving overwhelming support, while local nonprofits and small women owned businesses could use extra attention as well. In addition to volunteering and donating, reach out to a mother who might be struggling under the weight of this economic construct and do something to encourage and sustain her.

This work, nurturing relationships and caring for the space between, is the work of the unpaid and underpaid workforce in our world. And these are the people, mainly women and POC, who are emerging as the new leaders who will be able to bring peace and sustainability. It’s when we have the revolutionary realization that the system leaves out important information, that it’s the system that is sick, that we can step away from the argument of us vs. them and get to the work of changing it. This revolution is about love and peace, of nurturing a sick system back to health.

Making the hidden visible is a political act and it’s up to all of us, women and men, to ask the tough questions and imagine the possibilities.